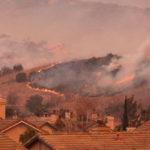 Just as many areas on the East Coast were getting cleaned up after hurricane season, areas on the West Coast have been experiencing a destructive natural disaster of their own. According to CNBC, first responders were searching for 200 missing persons as the massive wildfires engulf most of the state of California.

According to California.gov, state officials report that there were fourteen active wildfires throughout California, as of November 13th. Some experts are calling these gigantic blazes the worst the Golden State has ever seen. Just about every region of California is currently being impacted by wildfires, from the top of the state to Mendocino, to right outside of San Francisco and Sacramento, and even all the way down past Long Beach.

The three worst fires are now being referred to as the Camp Fire, the Hill Fire, and the Woosley Fire. The very worst of the wildfires reportedly happened in Butte County, Northern California, in and around the town of Paradise. Residents in this area and in parts of SoCal were either instructed to evacuate or use extreme caution due to a red flag warning for critical fire weather.

So what was the cause of the fires? Earth scientists believe it’s due to a combination of high winds coming from a jet stream, and extremely dry conditions. The high winds reached up to 60 mph in some regions. These extreme conditions combined to create the perfect storm of spontaneous combustion that rivals anything that California has ever seen in the past. Over 25,000 residents of the town of Paradise were evacuated from their homes. High winds continued to occur around the problem areas, as firefighters and first responders faced an uphill battle.

How to Stay Safe During California Wildfires

Every natural disaster brings its own unique challenges and dangers, and of course, wildfires are no different. If you live in one of the highly problematic areas such as Northern California, unfortunately, there was not much you could do to prevent your property from being damaged. However, as experts believe that wildfires will continue in California and in other areas on the West Coast for the next few years, there are some precautions you can take to minimize property damage while maximizing your personal safety.

While there is no predicting the damage or destruction that wildfires can cause, at least you know you’ll be prepared as much as possible for such an incident. Check out all of the natural disaster survival products from More Prepared.