How To Be Prepared For A Fire In Your Home 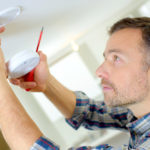 Every 60 seconds in the United States, there is a house fire that is serious enough to cause noticeable property damage and warrant a call to the fire department. Many of these fires present a significant danger to families, pets and the elderly. Do you have the right supplies if a fire breaks out in your home? The answer to this question might surprise you.

Even though smoke alarms are perhaps the most common item to help protect households from fire damage, a surprising amount of homes in the U.S. have too few of them. The National Fire Protection Association recommends that every home should have a smoke alarm installed inside each bedroom or sleeping area. Additionally, smoke alarms should be placed on every level of your home, including the basement. If you live in a 2 story, 3-bedroom house, you should have needed a minimum of five total smoke alarms.

It’s not enough to just have an extinguisher, though. You must keep it properly filled and know how to use it. However, if you have an old fire extinguisher, many outdated units should not be refilled even though doing so is possible with the right equipment. The nylon or plastic heads begin to crack with age, which could mean dangerous leaks. Consider buying a new extinguisher with a metal head.

An often-overlooked method to prevent injuries due to fires is to have an escape plan. Make sure that everyone in your family knows what to do if a fire breaks out in your home. Be sure to have an alternative to using the stairs, just in case that route is blocked. Develop and practice these routes, making sure that everyone knows at least two ways out of every room.

Sometimes in the event of dangerous fires, the only way to get out of a room is to escape through the window. However, young children and the elderly should not use this option, so consider purchasing a fire escape ladder.

The worst possible time for a fire to break on in your home is when everyone is fast asleep. A house fire with even oxygen can burn and smolder for quite some time, causing large amounts of smoke. The toxic gases from the large amounts of smoke are harmful or even deadly, as more people are hurt by smoke inhalation that the fire itself.

Smoke hoods are extremely valuable items that any family should add to their fire safety or disaster survival kit. Even just having a few minutes of breathable air can give you enough time to escape instead of passing out from the smoke.

Stocking your home with the right emergency survival gear can mean saving a life. Hopefully, you’ll never need to use them, but peace of mind is invaluable.