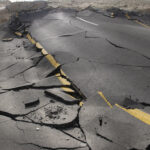 On October 18th, 2018 at 10:18 am PDT, there will be the Great California Shakeout. More than 10 million Californians and over 20 million Americans took part in in the Shakeout. There were also over 59 million people in other countries that participated in the drill.

Participants “dropped, covered, and held on” as instructed by emergency management experts and preparedness organizations. It has been established that this is the best method to prevent most injuries and deaths in the event of an earthquake. Here’s a breakdown of the drop, cover, hold on method:

There are also different steps that emergency preparedness experts recommend taking in specific situations such as if the person is in bed or outdoors during an earthquake. Experts recommend against other methods, such as the “triangle of life” concept, due to wrong information that could potentially be very dangerous.

Now in its 10th anniversary, the Shakeout started in 2008 in southern California. Since then, it has grown into a worldwide campaign to raise awareness of the damage caused by earthquakes and how people can protect their families and organizations from bodily harm. There are even participants in locations that rarely see earthquakes because we can never be too careful. Unlike an actual earthquake, there were mostly no freeways closed or electricity outages, unless local communities or power companies planned for such occurrences. The Shakeout organization encourages companies to organize participation in the drill at work because it’s impossible to predict what you’ll be doing if an earthquake hits.

If you’re interested in spreading the word about future Shakeout drills or earthquake preparedness in general, there are some useful resources available from the Shakeout organization such as flyers and posters. There are also some safety action guides that schools, businesses and so on can use for helpful information about the Shakeout drill.

Were you one of the 59 million-plus Shakeout participants worldwide? Do you think that the Shakeout is effective at raising awareness of the dangers of earthquakes?